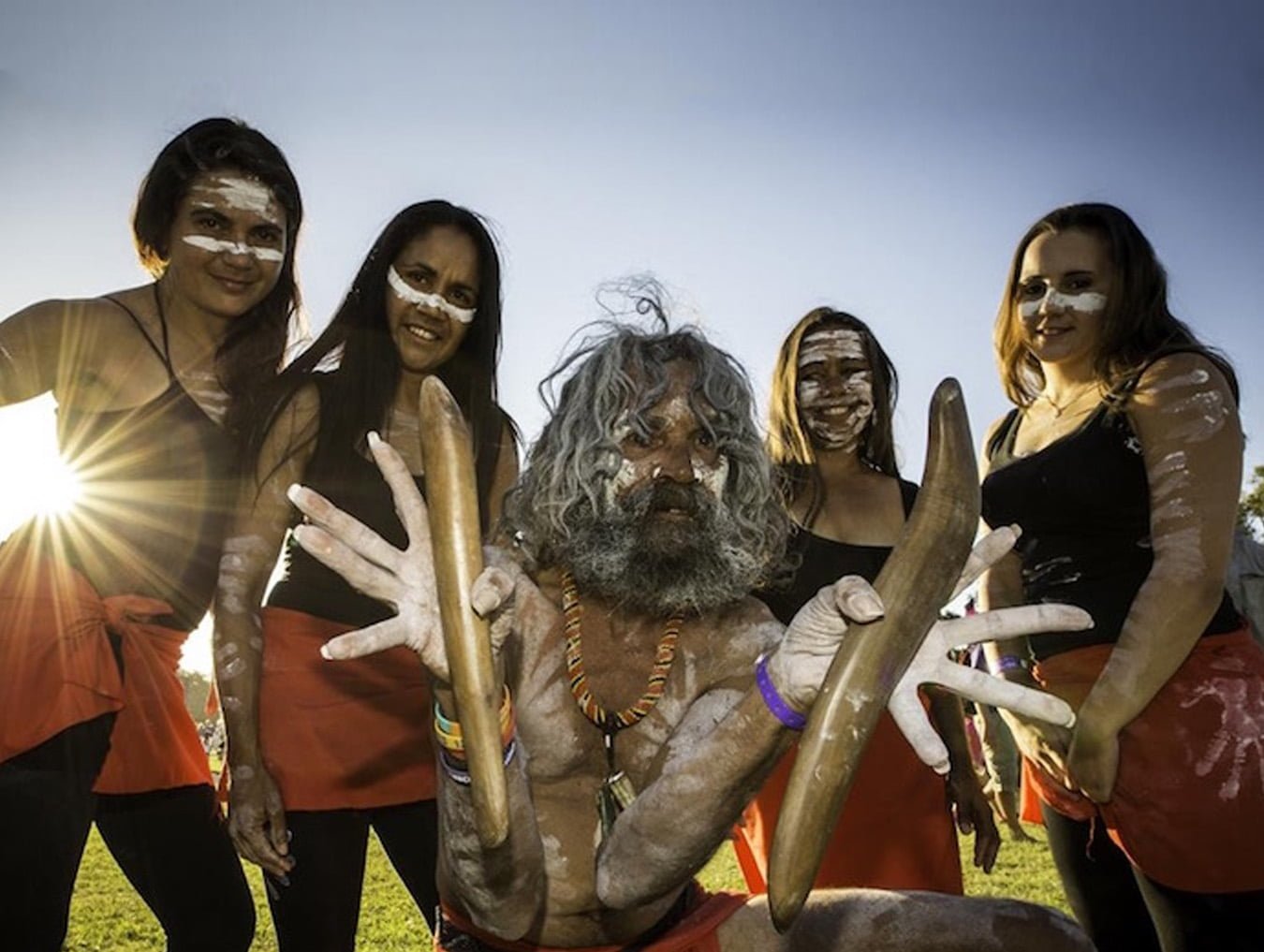 There’s a saying that if you can’t trace your ancestry back to the land you’re speaking about, then you have no right to speak about it at all. So when you’re in the presence of a storyteller whose ancestral homelands are intertwined with the very forces of creation, it’s nothing short of mesmerising.

Such is the case with Byron Bay’s local indigenous group, the Arakwal Dancers, who performed a Welcome to Country ceremony during the official opening of Elements of Byron. As you’ll read below, this not only gave local cultural custodians the opportunity to pay respect to their ancestors but also allowed non-Indigenous people a chance to acknowledge the unique heritage of this area.

What we learned through that mesmerising ritual was that the Arakwal people are an ancient culture whose feet are firmly planted in the here and now.

But first, a little history.

The Arakwal people refer to the area of Byron Bay and Broken Head as ‘Cavanbah’, which translates to “meeting place.” Before European settlers arrived, it was a popular location where trade could be carried out “and gossip swapped” between the Arakwal people and neighbouring Bundjalung nation tribes.

In 1894 the area became known as Byron Bay but today you will still find Cavvanbah Street situated between Main Beach and Shirley Street in town.

One of the more defining moments for the Arakwal community came in 1995 when they lodged a native title claim over areas of crown land, beaches and coastal waters between Belongil Creek and Jews Point on the north coast of NSW. Soon after, the New South Wales State Government, local community groups and surrounding businesses helped set up a corporation known as the Bundjalung of Byron Bay.

A historic treaty, which included three Indigenous Land Use Agreements (ILUA’s), was signed a few years later in 2001. One of the treaty’s legacies resulted in the establishment of Arakwal National Park – Australia’s first national park created under an ILUA.

This landmark agreement led to the prestigious Fred M, Packard award for “distinguished achievements in wildlife preservation”, which was presented to members of the Arakwal community at the 5th World Parks Congress in South Africa in 2003.

Negotiations for two further ILUA’s followed soon after, inspiring Governments and Native Title Claimants throughout Australia to use Arakwal as a best-practice model. This not only demonstrates the community’s resilience and ingenuity but also their determination to care for Country and create career opportunities for future generations.

Since then, native title holders are able to continue traditional practices in the Park, including:

Byron’s Arakwal community beautifully embodies universal themes we can all relate to – culture, country, family and community – regardless of gender, age or ethnicity. They not only infuse every facet of everyday life but also provide a connection point for travellers who might be visiting from other countries.

A popular belief system in many First Nations around the world, a totem helps define people’s roles and responsibilities within a community, and their relationship with each other and their ancestors. For Indigenous Australians, totemising an animal, plant or natural object like a rock, river or tree is also a powerful way to connect a person to Country and the Dreaming.

You may experience a Welcome to Country ceremony during your travels in Byron Bay. Often involving a blend of speech, song, dance or ceremony, this simple ritual sees traditional owners, usually Arakwal Elders, welcome people to the land. Not only does it give local custodians the opportunity to pay respect to their ancestors but also allows non-Indigenous people a chance to acknowledge the heritage and ongoing relationship that traditional owners have with this area.

Usually only performed at major events, a smoking ceremony is an ancient custom among Indigenous Australians that involves the burning of native plants – usually leaves, bark and fungi from trees – to rid a space or place of bad spirits. This captivating ritual not only cleanses a space before an event takes place but is also performed out of a sign of respect for Indigenous community members, both past and present.

Traditionally known as the Yidaki, the iconic didgeridoo is a wind instrument that has become a symbol for Indigenous Australians. Its unique, vibrational sound is created by blowing down the tube with loose lips, which is echoed and amplified as a drone. Didgeridoo playing is an integral part of sacred ceremonies and storytelling, with players able to use their breath to imitate animal sounds and behaviour through this extraordinary instrument.

While some travel destinations invite you to “step back in time”, only an authentic Australian Indigenous experience can truly combine the past, present and future in one package. The Arakwal people have a genuine willingness to share their stories, culture and Country, which they do through a range of programs and activities.

“Our culture is one of the most beautiful cultures in the world. It feels good to be a part of my culture, it makes me feel connected and have a strong identity and belonging. I think it is very important for all Australians to understand Aboriginal Culture and learn and recognise Aboriginal people as the First Australians and people that have been here for thousands and thousands of years. We need to learn and unite and look after this land we all call home.“ Nigel Stewart, Arakwal family member.

Here’s a timeline of Arakwal that takes you from the making of the midden at The Pass to the evolution of Broken Head Nature Reserve.